It was a warm summer’s day in 2013 when scientists researching fruit bats in Southern India noticed a unique behaviour in their subjects. The bats – who lived in an old fig tree in the village of Malumichampatti in Tamil Nadu – were performing oral sex on their mates!

This was a startling revelation to the scientists. Till date, this behaviour hadn’t been noticed in Indian fruit bats. Up until then, it was only observed in Chinese fruit bats, but no other bat species. This discovery was new and exciting.

Only a human experience?

There was the Egyptian Goddess Isis, who blew life into her husband Osiris’s body by sucking on his penis, after he was murdered by his brother Set. In the ancient Indian book of Kamasutra, there is an entire chapter dedicated to the use of aupariṣṭhaka (the art of oral sex) in love making. In the ancient city of Pompeii, archaeologists unearthed baths predating 79 AD, with wall paintings of couples engaging in oral sex.

Based on these evidences, scientists assumed that oral sex was the domain of human pleasure. That is until they found other animals engaging in it too.

Animals have evolved to have sex. This includes both penetrative and non-penetrative sex.

Pet dogs and cats are excellent examples of animals which engage in non-penetrative sexual behaviours – chair mounting, dry humping and self-stimulation (auto-fellatio). In farms, the same behaviour can be observed in horses and birds The same is true of wild animals like turtles, walruses and monkeys (amongst others), who indulge in self-love.

Animals like fruit flies, squirrels, bonobos, wolves, brown bears, sheep, Dunnock birds and Darwin’s bark spiders have been observed engaging in oral sex. The reason for this isn’t clear yet, although there are a few theories:

This has led to conjectures regarding the connection between oral sex and the length of penetrative sex.

Theory #2: Oral sex can remove bad bacteria from the vagina

The second theory proposed by researchers talks of the role of oral sex in animal health.

Some scientists believe that enzymes in the animal’s saliva can remove (and sometimes kill) bad bacteria, which live on/inside the mate’s sexual organs. This was one of the theories suggested regarding the Indian fruit bats from Tamil Nadu.

Theory #3: Oral sex can improve the quality and mobility of the sperm

Oral sex has also been presumed to improve the mobility of sperm, allowing the sperm to travel farther through the female’s reproductive tract and ensuring a successful pregnancy.

On this note, scientists have suggested that oral sex may work the other way too – make the female more receptive to mate, by stimulating the production of natural lubrication in the reproductive tract. In fact, this theory has been suggested regarding human females too.

Finally, the last theory considers pleasure as the only purpose for the presence of oral sex in the sexual repertoire of non-human animals.

There are many animals like bonobos and macaques, who have been observed experiencing true pleasure during sex. They engage in play during the sexual act. For these few animals, mating doesn’t serve a reproductive purpose alone. They have sex because they like it.

Some scientists believe that in these species, oral sex may only be a tool to increase pleasure; and nothing more. A lot like in humans.

Oral sex and homosexuality in the animal kingdom

The answer – its species-dependent.

This makes it very hard to define whether there is any connection between oral sex and sexuality the animal kingdom or not; or if like humans, there is absolutely no connection.

With greater awareness, scientists are slowly peeling-back the layers surrounding animal sexuality. We are learning more today about sex, reproduction and pleasure, than we ever did before. 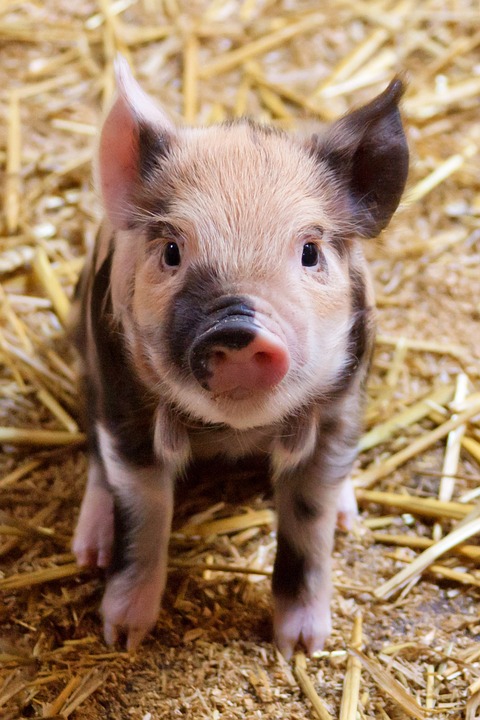 “Anorexia nervosa is a complicated disorder and genes aren’t everything. The genes load the gun but the environment pulls the trigger.”

When Dr. Janet Treasure, senior lecturer at the London Institute of Psychiatry conducted her research into the origins of Anorexia nervosa in humans, she found herself following a path not many knew about; but which could explain how Anorexia functions in human beings.

This path less travelled by, was the study of a disease that only few knew existed and which hardly any understood – Pig Anorexia.

The day the pigs came calling

It was in 1962 at a farm in Ontario, Canada that the resident pig keeper noticed something amiss with the new litter of piglets. The tiny creatures had been recently weaned from their mother and were being fed by hand by the farm boys.

While things seemed fine at first, the pig keeper noticed the piglets had stopped eating soon after, often starving themselves for days until they were just skin and bones. With this starvation came the vomitting, the weakness and the weight loss.

The hunger, combined with the deteriorating condition of the body, soon grew too much for the tiny piglets to cope with and the entire farrow lost its life.

This was the very first case of ‘pig anorexia’ as it soon came to be called and it is a disease that has affected pigs the world over.

The Hemagglutinating Encephalomyelitis Virus (HEV) is a RNA virus that affects porcine, aka pigs. As an RNA virus, it affects the pigs’ RNA, infecting the animal at the cellular level.

In every living creature, the DNA is the genetic blueprint of the body and it dictates the physiological and psychological make-up of the creature. The RNA is an acid present in the cells, which carries messages from the DNA and stimulates the production of proteins. These proteins are used by the cells to develop and control the functioning of the various organs inside the animal’s body.

Multiple RNA strands work within the cells of an animal’s body throughout its life. Ultimately, the RNA are responsible for the health of the proteins, the cells and the animal itself.

Now imagine if the HEV were to infect the RNA of the piglets. Each and every time an infected RNA would stimulate the production of proteins in the body, the proteins and by extension the cells, would be infected too.

Slowly over time, the HEV starts infecting the piglets from the cellular level by making their cells and organs diseased.

How does HEV spread?

HEV is just like any other virus and it spreads from contact with body liquids. These liquid spread between snout-to-snout contact and can also spread to pigs through indirect contact with boots, jackets, farm equipment etc. if pig saliva or mucus is splattered on them.

It’s been observed that most porcine populations are exposed to these viruses everyday. But only 1% – 4% of the population ever experience an active attack. Piglets are the most vulnerable to the virus, given their lack of immunity and strength.

Infected piglets will often have microscopic lesions inside their snout, on their tonsils and on the walls of their stomach. When the virus spreads, it moves to the lungs, small intestine and finally the brain through the sensory nerves. It is when the virus reaches the brain that piglets exhibit full-fledged anorexia-like symptoms.

The HEV has been observed re-writing the signals sent to the brain, changing the behaviour of the piglets. The affected piglets display low hunger levels at first and soon start skipping meals. During later stages of the disease, they may vomit extensively and may start dehydrating as a result. The muscles start to wear-out and soon, the piglet is just skin and bones. Death is an inevitable result of the disease.

The HEV-induced infection is a porcine-only infection and does not spread to humans.

Why is it called pig anorexia?

Anorexia nervosa is an eating disorder in humans, where the sufferer stops eating or refuses to eat and starts exhibiting a variety of symptoms including:

Pigs infected by the HEV  display symptoms  so close to Anorexia nervosa, that the disease has been named Pig Anorexia.

It can get extremely challenging to diagnose the presence of HEV in pigs. For one, symptoms resemble other diseases like Encephalitis, Vomiting & Wasting Disease or the Classical Swine Fever (or Hog Cholera). The only way now to identify if a porcine herd is a victim of the HEV, is to understand their origins and their environment.

Of birth and breeding

Pig pens are extremely fertile incubation areas for the Hemagglutinating Encephalomyelitis Virus (HEV).  Once the virus takes root, it cannot be eliminated. The reason for this is the lack of a cure. To this day, there is no clinical cure available to help affected piglets.

But, there is something pig breeders can do to reduce herd vulnerability.

But this still won’t be enough. It’s been observed that susceptibility to the HEV is also affected by genetics. Pigs birthed naturally, without human intervention have the highest chance of survival as they have the most natural genetic structure which is designed to combat fatal illnesses.

However, with humans preferring leaner bacon cuts over thicker ones, pig farmers are deliberately isolating and promoting those genes which give rise to thinner piglets. This type of genetic manipulation, makes the piglets weaker and more susceptible to infections, including the HEV.

Dr. Janet Treasure said, anorexia is as much about genes as it is about the environment. When combined with the weak genes, the poor rearing environment and pathetic post-birth care practices can double the chances of piglets developing anorexia-like symptoms post-weaning.

Pig anorexia – shattering the body and the mind

Physically, the impact of HEV-induced pig anorexia is nightmarish. Thousands of pigs die each year because of the lack of veterinary care. Exposure to infected piglets often puts other healthy animals too at risk and increases the headcount.

However, it isn’t the physiological impact alone that needs to be considered. Pigs are extremely emotional and cognitive creatures. They are inquisitive, temperamental and borderline-compassionate.

A 2013 research∗by Reimert, Bolhuis, Kemp, & Rodenburg showed how untrained pigs when introduced into a new pen of trained pigs, adopted the behaviours and mannerisms of their trained counterparts, after sustained exposure to them. These behaviours and mannerisms included everything from the way the tails were held to the vocalizations made to the choice of food the pigs were making. This could be an attempt at social acceptance by the pigs or a mimicry of a positive stimulus-response behaviour.

Now let’s apply the same logic here. Imagine if new pigs are introduced to an infected herd which displays signs of starvation, depression and social isolation. The new pigs too are more likely to mimic this refusal of food and they may socially isolate themselves, following the example of the herd.

This psychological impact that the HEV has on healthy pigs, can lead to true pig anorexia, with pigs refusing to eat out of fear, anxiety or depression.

The idea that pig anorexia could bring about a breakthrough in the study of anorexia in humans was unthought of. But during her study, Dr. Treasure realized how similar pigs were to humans in terms of psychology and social behaviour.

Her study into pig anorexia helped her understand a key component about Anorexia nervosa – while genes do play a vital role in indicating susceptibility to the disorder, it is the environmental factors that finally trigger the condition. Essentially, people may be pre-disposed to anorexia through genetics, but this pre-disposition is unlikely to have a major negative impact so long as the person’s upbringing is filled with love and support.

Just like fecal matter in pig pens, constant negative feedback from family can make people more likely to suffer from anorexia. Remove this environmental contamination and you reduce the subject’s vulnerability to the disorder. This insight is now helping medical professionals find lasting  treatments for anorexia in humans.